I got Vista Home Premium for my birthday. I have finally installed it and have it working somewhat properly. This darn user account control is killing me though. It is exactly like that MAC/PC commercial with the bouncer guy asking "Cancel or Allow?". SO ANNOYING!

My computer looks cool...with the Aero glass interface, but it is slow. Slower than before. It took me 3 minutes to start up today, including the time for Norton Internet Security to load. Ouch. Although, I hope it is just "indexing" stuff right now and later it will get faster.

I also have started growing a goatee. It feels funny on my face.
Posted by Matt Bullock at 7:36 AM No comments:

So I finally got it! Mel's sister, Diane found one in Peterborough for me. Yes, the X-Mas gift was a little late, but finally...it's here!

So it is amazing!! Everyone should have one. Too bad I am sick these days and can't play as much as I would like. It gets you off the couch and is actually kinda a workout!

Let me know if you want to play with mii!
Posted by Matt Bullock at 12:06 PM 1 comment:

I am taking part time french lessons at work. I remember learning french in grades 4-8, and it was a helluva lot easier than it is now. I think my brain is fighting to not accept it.

We have a two hour session mardi and vendredi morns. I really appreciate people who know more than one language. It is very difficult to listen to people speakin' french...especially on energie 104.1. While I require french to be promoted at work, living in Ottawa requires french (and working in Quebec!). I have re-activated some french channels on my t.v. which were previously locked out. (that reminded me of Flanders saying "199 channels all locked out" or something to the like!!)

So I am trying. I think you really have to be taking a full time french class in order to learn, but hey...it is during work hours, and I still getting paid!

If anyone knows of some good resources to learn french, let me know...
Posted by Matt Bullock at 4:37 PM 1 comment:

So what is the best remedy for a sore throat/head cold? A colleague from work told me his "Whiting cure"...was a shot of rum, 2 tbsp honey and 1 serving of Neo citran, all mixed together. Does anyone else know any good grandma recipes?
Posted by Matt Bullock at 7:29 AM 1 comment:

I can't believe it! Winter is here...the snow has fallen and the canal is beginning to freeze over. I will now finally enjoy wearing lots of clothes to worky (and sweating my ass off riding the bus).

I used to ski. I have tried snowboarding...and this year...I think (since I now own a car), I will go back to skiing. People tell me skis have changed...but I must experience it to believe it. What hills are good I wonder???
Posted by Matt Bullock at 3:54 PM No comments:

So back to work. I get such a headache staring at my computer screen for so long. And then when I get home, all I want to do is go on the computer...WTF? I must truly be a nerd.

The only good thing about being back at work right now is the bus ride is fast because the kiddies and a lot of parents are still off!! I hope they never come back.

Toll the Bridges in Ottawa

An Ottawa city counciller proposed to Toll cars using the bridges entering downtown Ottawa. How does this make you feel?

For me...I say Toll Away! I don't own a car, and since non-car owners get no tax break or benefit, I like this idea.

On a similar note, I heard that newborn children have a 1 in 2 chance of getting a form of Cancer in their lifetime. Largely due to environmental factors, I suppose. So, maybe this Toll will help more people consider alternative means of transportation?

Perhaps not.
Posted by Matt Bullock at 2:24 PM 1 comment:

My new Nephew and I 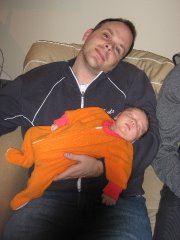